Trick Candles and The Crashed Cake

I’m not great with dates. As a matter of fact, I struggle remembering if my husband’s birthday is September 29 or 30. It’s the 30th… But it doesn’t stop me from debating between the those two days constantly.

So it works well for me that my dad and my father-in-law’s birthdays fall within a day of each other. Since my dad has had a post dedicated to him before, I thought I’d shine a little light on my father-in-law today in honor of his birthday.

My FIL has been on this Earth 76 years as of today. Yes you read that right and yes my husband, his son, is only 27.*insert my giggles*

I giggle because, if you are reading this and don’t know my FIL you probably have an instant stereotyped image of what he is like, BUT, if you know him personally, you know he is far from that.

Not only does he not look his age, he doesn’t act it. He gets up everyday and works on the farm, he has been known to send a text message (two to be exact), makes references to something he has seen on one of our SnapChat stories and is kinda a feminist.

Now that you know a teensy bit about him, let’s talk about his last birthday, the cake to be exact.

I’m pretty much walking chaos. If you’ve been reading my posts for any length of time that is very apparent. But as much of a hot mess as I am, I do like to feel apart of things.

So when my mother-in-law called me to let me know she was throwing together a 75th party for my father-in-law, naturally I asked what I could do to help.

Well that’s easy enough, I thought to myself and set out calling bakeries. Unfortunately for me, ordering a cake for 90 some people in the peek of wedding season was a no go, so I was faced with the task of baking one myself.

I’ve baked plenty of cakes, I’ll just keep it simple, no big deal, I remember thinking to myself.

The essence of me, Danielle Hayden, does not know, nor have I ever known, how to ‘keep things simple.’

And as life would have it, we had plans to be out of town for a friend’s wedding until the morning of the party. I planned ahead best I could, purchased all the supplies, but it’s hard to beat a fresh cake, and I REALLY wanted all the best daughter-in-law points i could rack up, so I did not bake anything beforehand.

We arrived home the day of the party around 8:30 a.m., knowing I had 5 hours to pull together this cake before the party I went straight into hustle mode.

The cake was to be a four-layer camouflage cake with fudge icing. And somehow, in just the nick of time, I pulled it off.

Here is what the cake looked like all boxed up to go in the car. 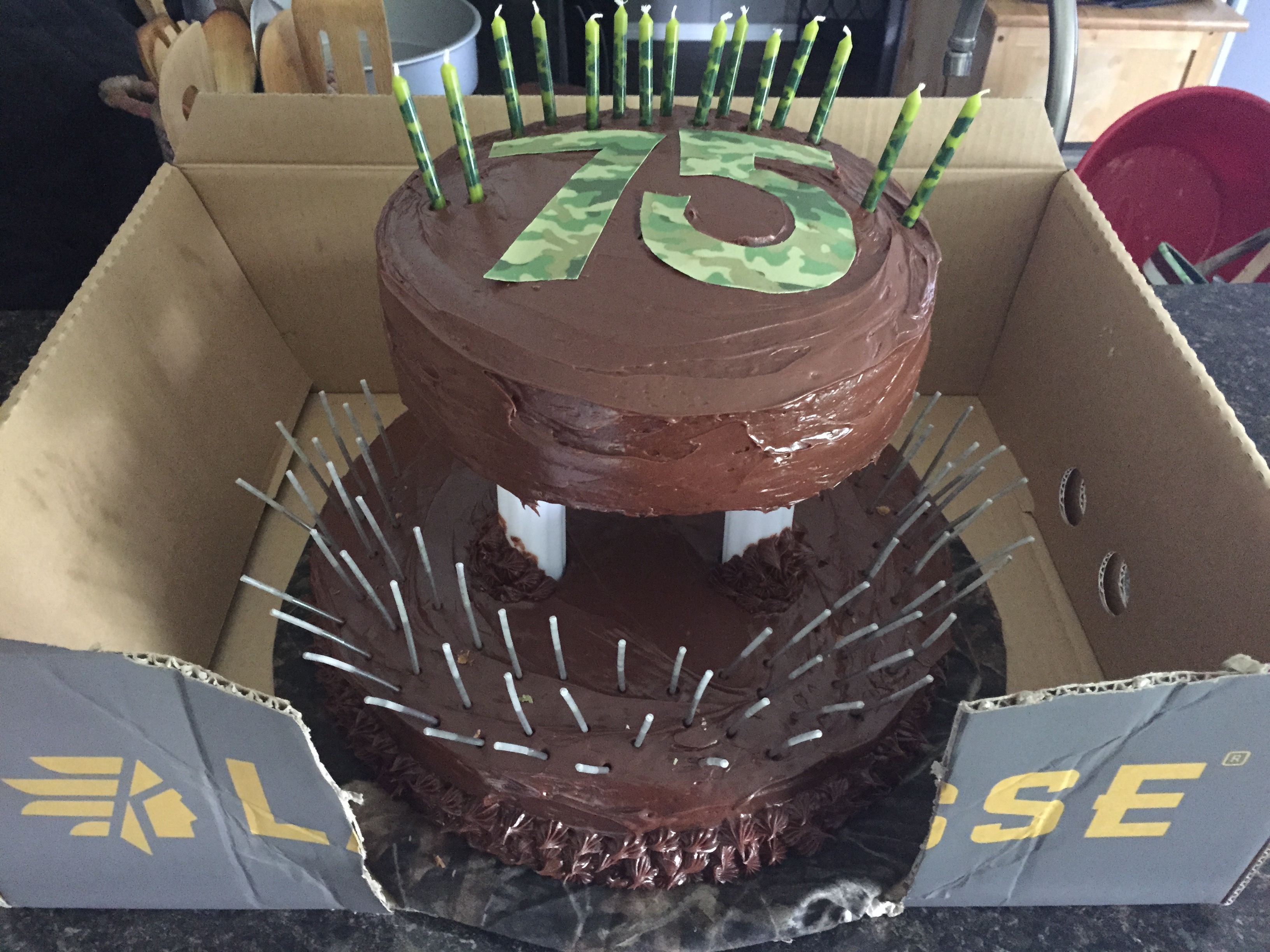 And here is what the cake looked like after it crashed in my car in route to the party.

It was a crazy hot day, and the humidity, even for Kentucky, was insane. I had taken every precaution to pre-cool the car and drive obnoxiously slow, but what my sleep deprived, super stressed to pull off this cake and be on time to party, self didn’t think about was that cakes should not be transported with its suspended layers attached.

The combination of the freshness of the cake, the softness of the icing, heat and humidity along with the drive was too much for my perfect little cake to bare and I heard a heart sinking crashing noise from the back seat as I turned (slowly) into my inlaws drive.

I was devastated and mad at myself.

“It’s okay! This is fixable!” he kept saying in a way that sounded like he was trying to convince both of us.

We hustled the cake down to the basement kitchen, grabbed our niece for extra help and hoped no one came looking for any of us while we reassembled the cake.

This is the best we could do.

Out to the party my once pretty cake went, while it no longer looked like what I had envisioned, I still had one more surprise up my sleeve.

Of the 75 candles adorning this birthday cake, 60 of them were trick candles.

He had no idea what was about to transpire. Oh yeah, there went all those daughter-in-law points I was trying to rack up. It took my FIL, MIL, Brother-in-law and husband to extinguish the cake ALSO part of the cake set ablaze mid blow out. It was a good time. And so, the brave guests of the party, who weren’t deterred by this spit covered, half charred, smashed icing, cake took their pieces, as I breathed a sigh of relief that even though ugly as it was, it proved to be delicious.

And now we are here, one year later, and for his 76th birthday, my father-in-law will be celebrating with a candleless ice cream cake, made by Dairy Queen and transported by my mother-in-law.

One response to “Trick Candles and The Crashed Cake”