Where Memories are Made

This past weekend, Yoda, My Someone and I headed to west Texas to visit our friend Garcia.

Since My Someone had surprised me by showing up early in Middle-of-Corn, Kansas the night before, our road trip was able to begin a little earlier, but after three hours in the car from Kansas to Stillwater and then a seven hour drive from Stillwater to Lubbock… The Haydens were starting to get a little restless, and I was completely over sitting in the backseat.

So, as you can imagine, I wasn’t tickled pink the next morning when I learned after breakfast all 5 of us would be loading up back into the car for another all day road trip.

At the exit for Canyon, Texas the billboard stated, “Welcome to Canyon, where memories are made!”

“What kind of memories can you make in Canyon, Texas? I mean, really?!” I said.

To which Garcia and Yoda quickly added, “You’d be surprised” and “Trust me, all kinds!” Meanwhile, My Someone sat quietly in the front seat increasingly fidgeting with a practice epee-pen.

We ended up at the Palo Duro Canyon State Park. Which is absolutely beautiful, and makes you wonder if you are actually still in west Texas. 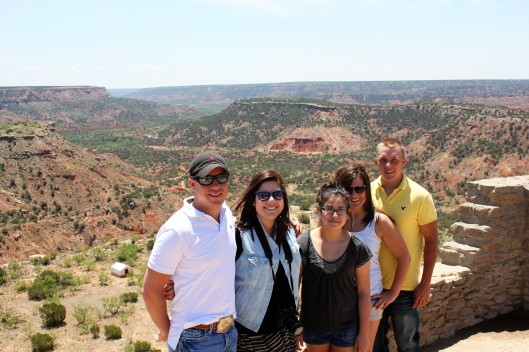 All of us were tourists. To the extreme. Garcia and I were equipped with our Canon’s and camera bags with extra lenses, while the boys and Garcia’s sister, Dre rocked the iPhone camera. 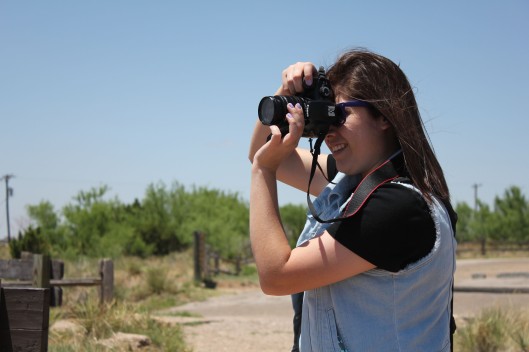 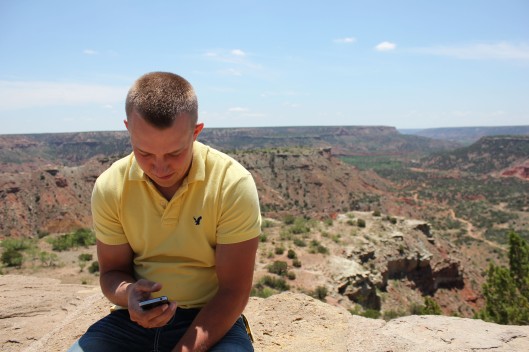 A few hours into the adventure, Yoda found a trail he wanted to explore. We had all hiked a little ways when My Someone and Yoda hopped off the trail and started climbing up the side of a hill. There seemed to be no changing their course so the rest of us followed.

When Garcia, Dre and I caught up, the boys were goofing off on the side of the incline, trying to scale it and then both crouching down to look at the soil.

“Good Lord, you two are the biggest nerds!” Garcia yelled.

“Danielle, come here and see this rock!” My Someone called to me.

I climbed the rest of the hill expecting to be given a lesson in canyon rocks, but instead when I got there, he stood up kissed me and said,

“OH MY GOD! GET ON WITH IT ALREADY!!!” Yoda interjected.

(At this point I was extremely confused as to what in the world was going on, and was beginning to think the heat had gotten to My Someone)

“I want to spend everyday for the rest of my life proving all that to you,” My Someone continued.

And it was at that point in the Palo Duro Canyon State Park in Canyon, Texas that My Someone got down on one knee. And it was also at that very moment when all oxygen I was trying to breathe, completely disappeared from that same Canyon.

“Oh. My. Goddd,” were the not-so-poetic words that came blurting out of my mouth.

“What I’m wondering is if you will do the honor of marrying me,” he said

Seriously, where in the world did all the oxygen go? Every single fiber of my being was screaming YES! YES I WILL!! But none of that came out. In my effort to find some air to get the word out, I turned away from My Someone (which I found out later made him panic), gave up on trying to get oxygen in my lungs and starting shaking my head yes, and smiling so wide it hurt my face, finally squeaked the words, “Of course” out and handed him, my very shaky left paw, and he slipped the most perfect ring onto my finger. 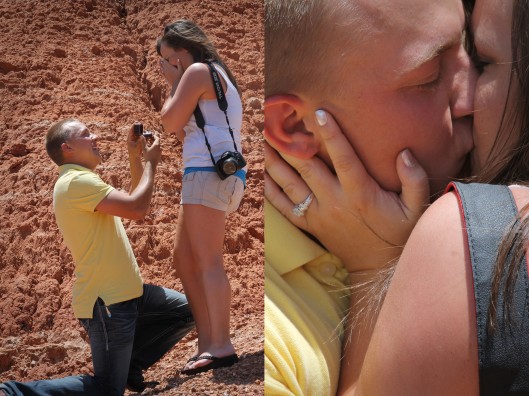 There was then lots of kissing, Dre covered her eyes, Yoda yelled and jumped up and down in excitement, Garcia took play-by-photos and then I continued to look for oxygen. 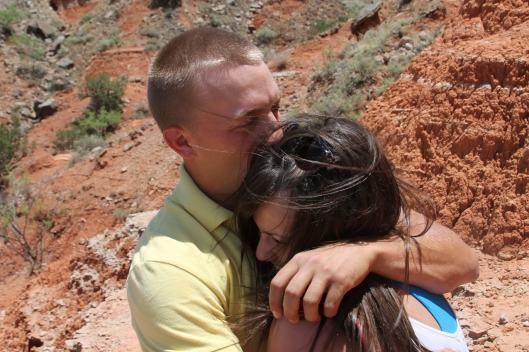 Seriously people, where the heck was it? 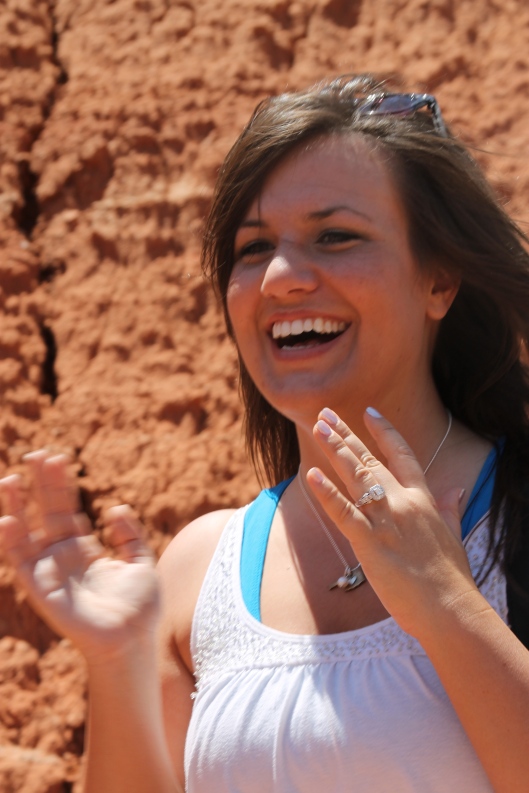 It all made sense then, My Someone had gotten into town earlier in order to take my dad to dinner for “the talk.” Why he had been fidgety all day. Why Yoda had been on a mission to find an extremely scenic place off the trail, and why Garcia had referred to me as a “Honorary Hayden” during a picture with the boys earlier in the day.

We spent the rest of the afternoon sending texts and calling family and friends to share the news, and the evening celebrating with the group at a Piano Bar in Lubbock. Because nothing says, “Yay! We’re engaged!” quite like singing ‘Friends in Low Places’ at the top of your lungs.

You may be able to watch your dog run away for days, but memories are made in west Texas, trust me, I know.

34 responses to “Where Memories are Made”