I should never be cocky.

When this project began I knew that there would be a withdrawal period. “It’ll hit David first,” I thought to myself. I mean lets get real, I’m a girl. I know what it’s like to diet or live off of unsweetened tea and steamed okra for two days in order to drop a dress size fast, or try and be ready for that emotionally-terrorizing time of year, that is swimsuit season. David, on the other hand, has been skinny his whole life and has no idea what it’s like to give up “fun food.”

Again, I should never be cocky.

Withdrawal mode set in on day two for me. Yes, I said day two.

Tuesday, I woke up with a headache. As I got to work I noticed how heavy and achy my arms and shoulders were. That was then followed by the inability to form complete thoughts, due to my pounding head and fuzzy thoughts. Yes, day two came a callin’ with a vengeance. Thankfully, after a filling lunch and a few minutes with my eyes closed, I was able to return to work feeling much more like myself.

Then Wednesday showed up. I began my morning with a cold shower. (While that has nothing to do with being vegan, it should’ve been a sign it was all down hill from there.) Hoping that it was just a bad coincidence, I crossed my fingers it would be miraculously cured when I got home from work. Other than my icy wake up call I was feeling pretty good, I worked through the Mountain of Doom, that is my email, and prepared to head to a Cattle Conference in Dewey, Okla. (Ironic huh?)

Halfway to Dewey I realized I hadn’t eaten yet. Obviously, I wouldn’t be able to eat anything at the conference so I had to find something quick. I could see nothing but pasture and crop land for miles… Then out of the nothingness I came across a gas station with a Subway. “I’m saved!” I thought. Inside the conversation went like this:
“Is your flat bread made with milk or eggs.”
“Yes.”
“Okay, I’ll have a salad then.”
“What meat?”
“None”
“What cheese?”
“No cheese.”
“What veggies then?”
“ALL OF THEM!”
Salad in tow I headed to the conference. Two hours into discussing proper pasture maintenance and meeting your cattle’s nutritional needs in a drought, I realized my salad had worn off. Then things got worse.

The conference took a break and served cookies, pop and coffee. I was hungry, but I stood strong. Instead I sipped my bottle of water and glared at those chocolate cookies laying in the tray all smug like.

I was getting irritable.
That’s an understatement.

The longer the conference drug on, the crankier and more irritable it got. Everything was like nails on a chalkboard to me. Meet withdrawal mode stage two.

As the conference ended, I made a beeline to my car. It was safer for everyone if I just got away from populations of people in general. I made my way back to Middle-of-Corn, Kansas, but made a stop at the Dollar Tree to see if they had E.L.F makeup, a vegan line that is carried there. They didn’t have anything I needed, but I found a bag of vegan friendly pita chips. I could instantly feel my mood bettering as I munched on those delicious chips all the way home.

I got home at 7:30, and went to start making dinner. But low-and-behold, guess who was still hot waterless?! (Guess those things don’t miraculously fix themselves) I spent the next hour trying to fix it while My Someone assisted through FaceTime. Verdict: My hot water heater is a goner. So at 8:30 I FINALLY got to start dinner, I was tired so I made a quick meal of buffalo cauliflower (Yum!), and finished the evening by baking oatmeal muffins for today.

So here we are, morning four of Project Vegan. I woke up at five with the realization I didn’t have hot water. Since cold showers in January aren’t my cup of tea, things got western. Yes, at 5:30 a.m. I put all my big pots on the stove top to boil, filled my bathtub up part way with the cold water and then added all the boiling water to it. I then took two pitchers and filled them with the tub water. 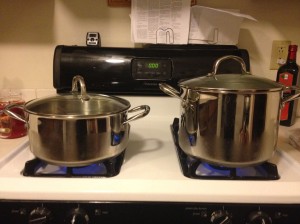 The result? A quarter-way filled bathtub with luke warm water, and some very creative bathing/hair washing techniques. This morning was one of the few days I was SO thankful I live alone…
Despite the morning drama, day four has so far alluded no withdrawal symptoms, AND I even attempted vegan makeup today! 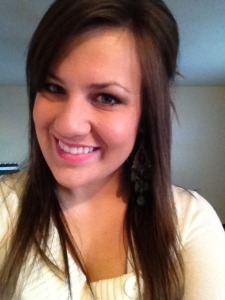 This is my vegan war paint. 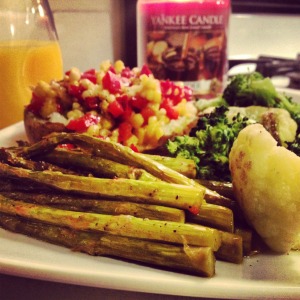 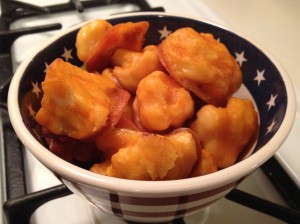 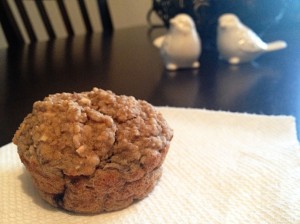 Check out our hashtag #DandDgovegan, be sure and follow along with David’s adventure at Farmingamerica.org as he talks about our email from PETA and fake bacon.
Until next time!!