Let me tell you, I’m thankful for the state of Kentucky, because they know how to show up in full force for Camo Friday. After posting my first Camo Friday with Snickers, I received an e-mail regarding another fun dog. Well this story definitely tugged at my heartstrings, and knew it was perfect for a Camo Friday feature. 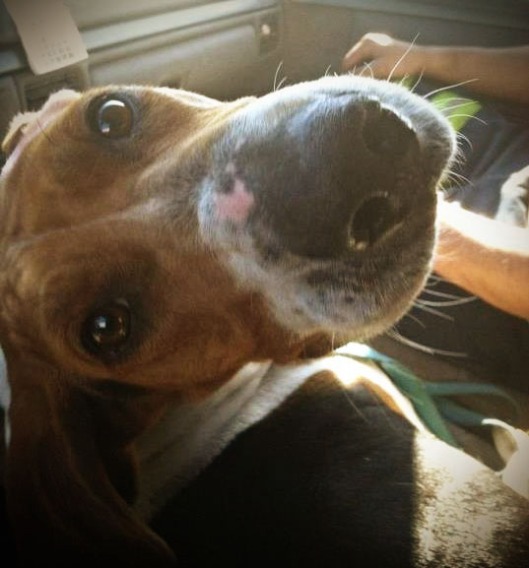 Dingy is Treeing Walker Hound, and a previous shelter dog. I’ll let Sarah, tell you the rest in her own words.

“On April 5, 2012, my husband, Dustin and I were on a random Sunday trip to Petsmart in Evansville, Indiana. We were in no way looking for another dog, but they were having an adoption drive and we decided to take a peek. We were immediately drawn to Dingy, since she is a Treeing Walker Hound, our favorite breed (We own two other Walkers besides Dingy.).”
“She was not a dog happy to see people. The volunteers were surprised we even wanted to see her. She had to be drug out of the back of her kennel and automatically squatted down like she was intimidated. We both were a bit leery, but quickly realized she wasn’t going to be an aggressive dog, just withdrawn.”
“They informed us that she was a turn in, and had already been adopted once, but had a habit of running off, so she was brought back.”
“Because she had almost over done her welcome at the shelter and was about to be put on the euthanasia list, a volunteer there told us we could adopt her for $40. We knew then we had to take her home.”
“She was a very spooky dog, she would jump and run if someone sneezed or coughed, if someone started talking loud she would jump, and watch them very closely. It took her a month to wag her tail.”
“After about 3 months we finally trusted her enough to take her hunting. We took her one night and she picked it back up like she was an old pro. She is all business when you turn her loose to coon hunt.”
“She loves going hunting and riding in the back of the truck. She gets to sleep inside, goes on car rides, LOVES kids and other dogs, we even took our engagement pictures with her. There has not been one day where we have regretted adopting her. Dingy is so very special to us. She still has her quirks, but we have learned to cope with her anxiety.” 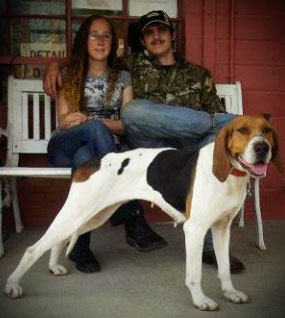 “Shelter dogs really do know when you save them, and they show you thanks every day for it.”

Sarah also said that her husband has a Facebook page called “Shelter Hound Rescue,” the purpose of the page is for people to share information on hounds up for adoption and to ultimately help more hounds get out of shelters and back into the woods.

Thank you Sarah for sharing Dingy’s story! I don’t know about the rest of y’all but I love heartwarming stories, Sarah and Dustin truly have big hearts.

Be sure to pass along the “Camo Friday” word, so maybe you or someone you know can be featured next. Comment below or contact me, my information is under “Cajun Born, Okie Raised.”

and with that… Happiest of weekends!